LeBron James is a NBA player for his hometown team, the Cleveland Cavaliers

He was drafted by the Cavs in 2003 straight of high school and eventually transferred to the Miami Heat from 2010-2014,

where he won two NBA Championship rings in 2012 and 2013. In 2014, James returned home to Cleveland, taking the team to victory in 2016. “King James” represented Team USA at three Olympics. He won gold in 2008 and 2012 and bronze in 2004 in Athens. Off the court, James has a philanthropic side. He launched the LeBron James Family Foundation in 2004, which in conjunction with the Akron Public Schools, aims to improve graduation rates. James appeared in the film “Trainwreck” and is in discussions to star in the “Space Jam” sequel. James created and voiced the YouTube animated series “The LeBrons,” which lasted three seasons. James was born on December 30, 1984 in Akron, OH. He has been married to his high school sweetheart, Savannah Brinson James, since September 14, 2013 and the couple has three children, LeBron, Jr., Bryce Maximus, and Zhuri. 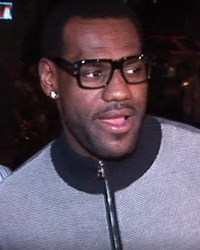