Review: A Through And Honest Look at SkinnyMint 28 Day Teatox

by MateFit Guru October 8, 2016
If you've been wondering about trying Skinnymint but the amount of sponsored posts has you unsure about who you can trust and who has actually bothered to look into the real pros and cons - welcome, my friends, to a full, thorough, honest, unsponsored review of Skinnymint 28 Day Teatox. 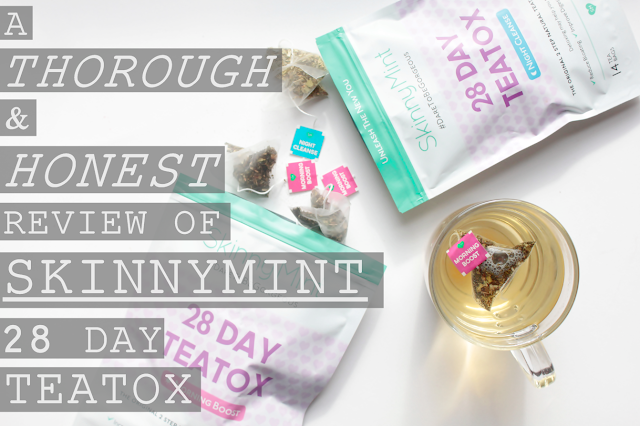 I'm going to start by saying that I was sent these products to review, but that's never swayed me to review things certain ways before and it wont now! So lets begin...
What is the Skinnymint 28 Day Teatox?
The 28 day teatox consists of drinking two varieties of tea - one 'Morning Boost' which is drank each morning to give you a bit of pep and energy. 'Night Cleanse' is drank last thing in the evening every second night, to help 'flush out toxins' and remedy bloating and constipation (basically, it makes you poop.) For $54.90 (USD), you receive 28 morning tea bags and 14 night time tea bags.

The aim of 'teatoxing' is to 'help boost your metabolism, flush out toxins, reduce bloating and burn fat'.
The teas are drank alongside whatever you usually eat, and can simply replace your usual morning and evening drinks.
What is in the Teas? 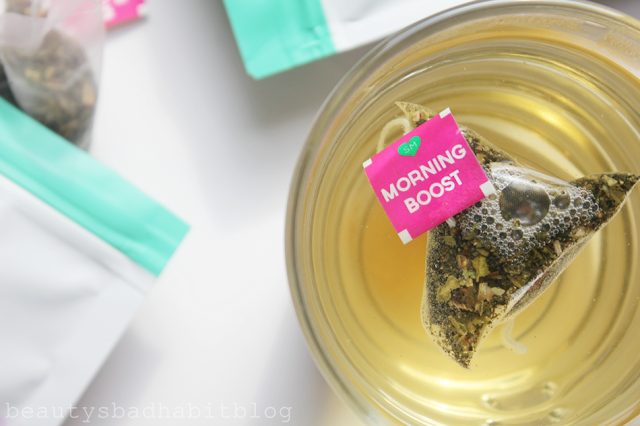 MORNING BOOST
Morning Boost is primarily a green tea blend, with over half the contents of each teabag being green tea leaves. Green tea is a well known aid when it comes to weight loss, helping to boost the metabolism and burn fat more efficiently (with at least 3 cups consumed daily) although not all studies agree on this. Since green tea contain caffeine, it will also give you that slight caffeine 'buzz' or boost you might get from your regular black coffee.

Alongside green tea, we have yerba mate, another metabolism boosting tea which is also said to be able to stem your appetite and make you feel fuller for longer as it slows digestion. The caffeine content in yerba mate is also fairly high - again, adding to that boost Skinnymint have blended 'Morning Boost' for.
Next up, we have to ingredients well known for their diuretic (makes you pee) properties - nettle leaves and dandelion. Both nettle and dandelion have been used for centuries to help with digestive health - nettle is particularly good for stomach discomforts as it also happens to be a mild natural painkiller.
Guarana also plays a part in that 'boost' - considering it contains twice the caffeine content of coffee. All together, however, 'Morning Boost' contains less caffeine than a cup of coffee.
After all of these, we have grapefruit leaves, pineapple and strawberry. Skinnymint list a few benefits of these on the ingredients page, but honestly, I think they're just there to give a bit of aroma and flavour! 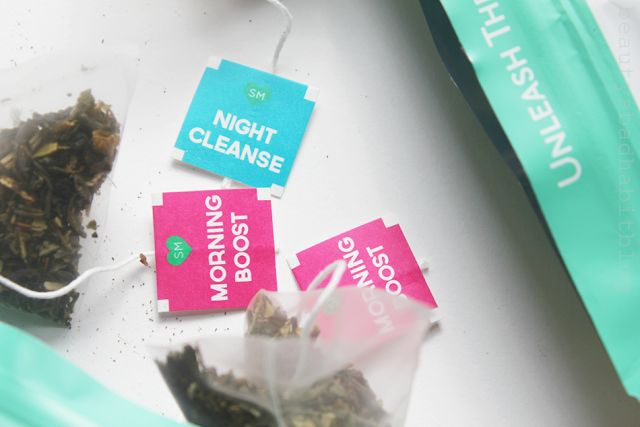 NIGHT CLEANSE
Night Cleanse is a senna tea, supported by a host of other ingredients which boost senna's main property as a laxative. Now, senna is pretty darn strong stuff! It is the most used natural laxative in the world and senna teas should not be consumed by anyone with digestive issues unless your doctor thinks it could benefit you. Long term consumption (generally considered 2 weeks of longer) of senna can have anegative effect on your digestive system, actually making it dependent on senna to function properly. It is, therefore, quite interesting that Skinnymint sell a senna product they recommend taking every two days for four weeks. On their FAQ page, they actually suggest 'experienced teatoxers' might try taking 'Night Cleanse' daily - not a good idea!

Following from senna we have ginger root - another well known player in the world of digestive health. Skinnymint were quite clever in including this guy, as ginger will help in soothing the digestive tracts after senna has done its thing by irritating them. Gingers soothing properties has actually made it quite popular with those who suffer with irritable bowel syndrome!
Peppermint leaf is a genuine wonder ingredient and peppermint tea is something I've actually drank for years. It's brilliant for stomach aches and cramps. Peppermint is also a great aid in stopping bloating, as it helps you rid excess gas (yup, burping and farting - better out than in) which can make your stomach appear flatter.

Licorice root and psyllium husk are both included in the mix, licorice for its ability to soothe the stomach no doubt, and psyllium for its fiber and colon cleansing power. We also have hawthorn berry thrown in, which helps with anxiety, insomnia and mood-swings. 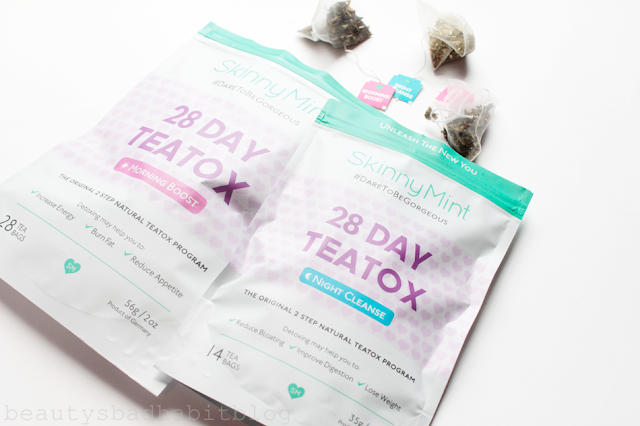 How do they taste?
'Morning Blend' tastes like fruity green tea, as you might expect! Truth be told, I didn't like green tea at all before starting the teatox and now I actually quite enjoy it. The trick is NOT to brew it in boiling water, as that creates the nasty bitter taste I'm sure more than a handful of us associate with green tea.
'Night Cleanse' is pretty darn gingery, which makes it taste very warming and soothing. Ginger is the only flavour I get from this, then again, it is the strongest spice so it's to be expected.
If either tea isn't to your taste, you can always add lemon or other citrus fruit, mint, herbs, cinnamon or honey to the blend without hindering their diuretic/ laxative properties. They can also be prepared in advance, kept in the fridge and served with ice.
Are they Convenient?
I'm a regular tea drinker and have enjoyed herbal teas since I was a kid, so for me the only difference has been which tea bags I use! The seal up packets are handy and make the teas easy to travel with or store neatly away. 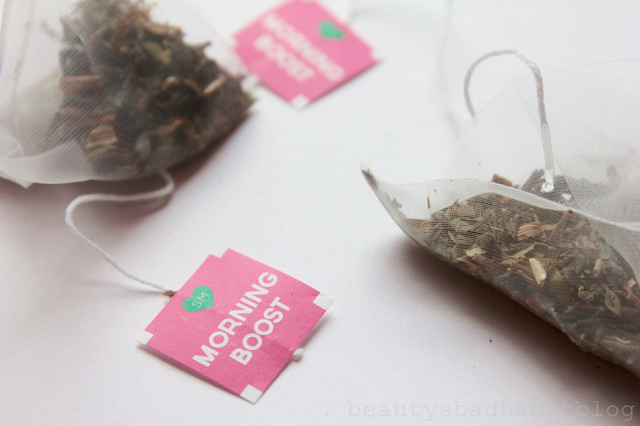 How Strong are the Diuretic and Laxative Effects?
I am more or less constantly peeing these days - it's pretty annoying, especially if you have 'Morning Boost' before you plan on doing a workout! Have you ever walked/ jogged on a treadmill for 40 minutes while in dire need of a pee? I have, it's not fun! It also means I'm drinking more, as it's easy to become dehydrated while taking diuretics, which again leads to peeing more! I'd think twice about drinking 'Morning Boost' if I knew I'd be out and about without easy toilet access for the morning.
The laxative effects of 'Night Cleanse' take place 6 - 12 hours after drinking the tea, you will NOT wake up suddenly in the night with the urge to go to the loo (or worse!) Again, I wouldn't take 'Night Cleanse' if I was going out within those hours without knowing if I'd easily get to the loo.
Do they Detox?
No. I don't know when this idea that peeing, pooing or sweating more than usual help to 'detox' the body became such a big thing, but it's a load of rubbish. Lets talk about why.

The human body has evolved in a way which means that basically whatever the hell we throw at it - be it drinking excessive amount of alcohol, binging on junk food night after night or heck, even something more hardcore - it can get rid of any harmful chemicals or toxins very effectively. Your body is ALWAYS detoxing itself naturally, it was designed to. If you really want to help your body in this process, it's very simple indeed - 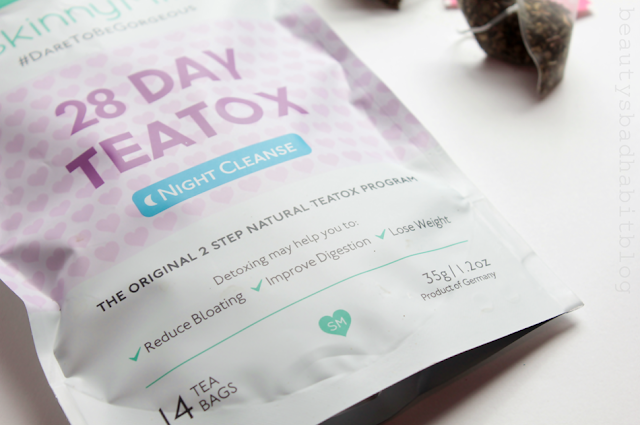 What's the Science of Skinnymint?


Skinnymint says it was 'scientifically designed', yet strangely provides no evidence of this. I would at least expect links to studies on the various ingredients, but nope, none of that. However, I do recommend researching such products independently as businesses can pick and choose which studies they link to, meaning you only see the rainbows and sunshines studies they want you to!
It's also worth noting that the statements made by Skinnymint about the benefits of their teas are not currently approved by the FDA.
So...Would I Recommend Skinnymint?
Lets look at the aims of Skinnymint -
Help Boost Your Metabolism - 'Morning Boost' does contain metabolism boosting ingredients, although more studies are needed on both green tea AND yerba mate to confirm their effects on the metabolism. Have I experienced any excess fat loss since starting Skinnymint which could be attributed to a heightened metabolism? Honestly, I couldn't say, as I have been doing an intensive fitness regime and eating super clean - both of which should aid fat loss, too, so I couldn't pick apart what the tea and what working out would be responsible for!
Flush Out Toxins - No, no, no, 1000x no. Just stop. Special teas will be no more helpful in this than drinking and eating right!
Reduce Bloating - Truth be told, I have noticed my stomach is flatter since starting the teatox, but
again, this could be down to exercise and eating clean. I've also stopped eating 'heavy carbs', refined sugars and excess salt - all of which contribute to bloating.
Fat Burning - This links in with boosting metabolism, as I'm afraid wonder ingredients which melt the fat off you just don't exist. If you want to burn fat and temporarily boost your metabolism, try high intensity interval training!

Lose Weight - Surely this is the same as the fat burning claim...? Otherwise, we're talking water weight which fluctuates day to day anyway, or muscle - which you really don't want to lose!

Reduce Appetite - I have a low appetite anyway, but I haven't noticed a change in it at all. If anything, the exercise I've been doing has made me slightly hungrier than usual.

Increase Energy - I do feel I have a bit of pep after 'Morning Boost' for an hour or two, but otherwise I've actually been more tired than usual recently. I was ill last week, however, so I could just still be getting over that.

Improve Digestion - I'm very lucky that I've never had digestive issues, even when I ate meat in Asia from street stands after four years being veggie I never had so much as a stomach ache! Maybe that means I'm not quite the ideal person to comment on improved digestion, then, but 'Night Cleanse' sure gets things moving...

Also realise that any benefits from Skinnymint you might experience will only be felt DURING the teatox. Afterwards, your bloating will return and your metabolism will go back to normal (if it even changed.) This means Skinnymint is best for a 'quick fix' like I mentioned earlier - holidays, weddings etc. 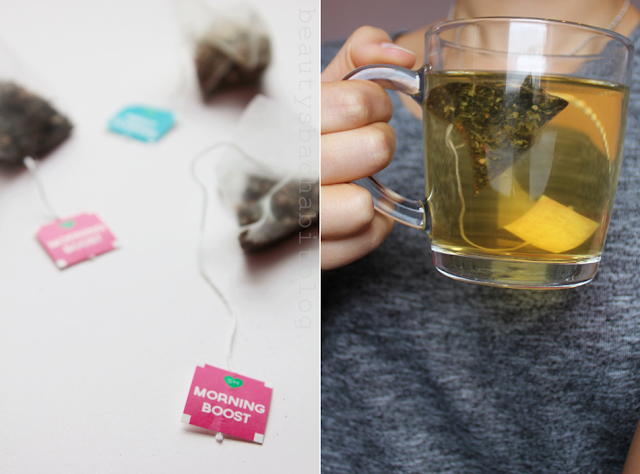 Is it healthy to take diuretics and laxatives for four weeks? Probably not. I've already mentioned how 'Morning Boost' can make me feel a bit dehydrated and how your body can become reliant on senna is a short amount of time. It's always best to leave your body to do its thing naturally, and only add aids if it GENUINELY needs it and after talking to a doctor.

So would I recommend Skinnymint? No. It's expensive for what it is, its effects are not proven (and if they were, you could get the same effects from different products for cheaper), it's a quick and temporary fix to problems that can be solved with healthy eating and exercise and it claims to 'flush out toxins' when all your body really needs to help with that is water and clean eating...

Save your money - pop to the supermarket to buy a box of green tea for a few quid instead, your wallet and your body will thank you for it!


* Products received for review purposes. Opinions 100% my own and 100% honest, as always! *
Courtesy : http://beautysbadhabitblog.blogspot.com/